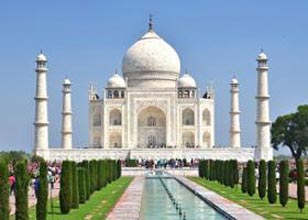 In the Heart of India

This sixteen day trip takes us across the central India showcasing unique and dynamic faces. This heritage trip allows us to learn about majestic traces of former empires and offers the beautiful sceneries on the way. Our trips begin on our arrival in capital of India. Following the trails of heritage tour, we arrive in Agra where magnificent Red fort and Taj Mahal, true epitome of love are the main attractions. Moving to the next destination-Gwalior where the fort and its premises are well maintained and house many historic monuments including palaces, temples and water tanks. Route between Gwalior and Khajuraho allows us to visit small but important cities from historical point of view such as Orcha, Datia. The erotic and other carvings that swathe Khajuraho’s three groups of World Heritage–listed temples are among the finest temple art in the world. Now, proceeding to Bhopal where we visit Sanchi stupa - Buddhist complex. Visiting the cities Enroute such as Indore, Ujjain, Dhar, Mandu, we finally reach Aurangabad. Alongside other historic relics, such as a group of ancient Buddhist caves, these Mughal relics make Aurangabad a good destination to explore. But the real reason for traipsing here is that the town is an excellent base for exploring the World Heritage Sites of Ellora and Ajanta. After having submerged in historical fast, we fly to Mumbai. The heart of the city contains some of the grandest colonial-era architecture on the planet but explore a little more and we’ll uncover unique bazaars, hidden temples, hipster enclaves. Our trip concludes here. HIGHLIGHTS The magnificent Taj Mahal in its full glory Visit the immense fort of Gwalior The medieval city of Orcha, Eastern and western group of Temples in Khajuraho Beautiful city of Dhar, Omkareshwar et Maheshwar Beautiful sculptures, paintings and frescoes of Ajanta and Ellora caves Mumbai - Commercial capital of India 16 days from 1600$ per person. International flight not included.International flights tickets Domestic flight tickets for the Sector: (Aurangabad - Mumbai) Travel insurance Lunches and dinners during the trip Miscellaneous Expenses - drinks, souvenir, personal expenses etc. Tips for driver and other local staff Charges for Camera in the monuments and Parks The cancellation and baggage insurance, assistance and repatriation Indian Visa All services not mentioned in "Inclusion"

Discover the land of Maharaja, Rajasthan and get submerged in the environment of the emblematic palaces and spectacular forts. Read More...