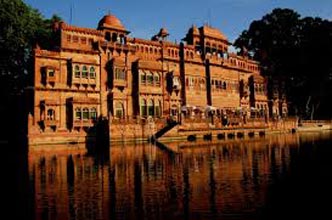 Rajasthan also known as the “Land of Maharajas” is the largest state of India. A Land of Brave Men, Exceptional Tales, Exotic Architecture, Vibrant Culture and Warm Hospitality. The glory of Rajasthan is retained by its majestic palaces, forts and monuments. The vibrant culture and rich heritage of this princely state draw innumerable tourists from across the globe. Rajasthan's major attractions include the ruins of Indus Valley Civilization, the oldest mountain range- Aravalli, a Jain pilgrimage site known as Dilwara Temples, Karni Mata Mandir, the only hill station of Rajasthan- Mount Abu, Keoladeo National Park (formerly known as Bharatpur National Park, the Ranthambore National Park and the Sariska.

Payment Terms & Methods :
40% Advance Percentage of total booking amount
Airfare/Transport fare to be paid full at one time in advance.