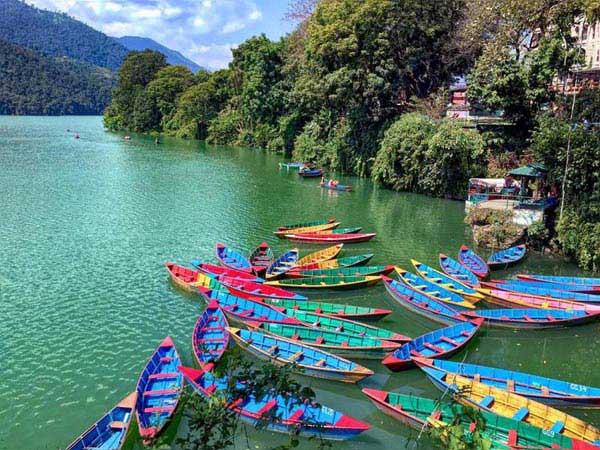 Nepal nepal, the Landlocked Multiethnic, Multilingual, Multi-religious Country, is Situated North of India in the Himalayas, in the Region Where, About 40 to 50 Million Years Ago, the Indian Subcontinent Has Crashed Into Asia. Because of that Accident, Nepal Has Some of the World's Highest Mountains Including Sagarmatha (mt. Everest, 8848m, Which It Shares with Tibet (by Now a Province of China). the Highest Mountain On Earth is Towering Above Populated Valleys and Forested Plains. Somewhere Here in the Kapilavastu District, There is a Place Called Lumbini Where in About 500 B.c.e. Queen Mayadevi is Said to have Given Birth to Siddhartha Gautama, Better Known as Buddha. pokhara pokhara is a City On Phewa Lake, in Central Nepal. It's Known as a Gateway to the Annapurna Circuit, a Popular Trail in the Himalayas. Tal Barahi Temple, a 2-story Pagoda, Sits On An Island in the Lake. On the Eastern Shore, the Lakeside District Has Yoga Centers and Restaurants. in the City's South, the International Mountain Museum Has Exhibits On the History of Mountaineering and the People of the Himalayas. chitwan chitwan National Park is a Preserved Area in the Terai Lowlands of South-central Nepal, Known for Its Biodiversity. Its Dense Forests and Grassy Plains are Home to Rare Mammals like One-horned Rhinos and Bengal Tigers. the Park Shelters Numerous Bird Species, Including the Giant Hornbill. Dugout Canoes Traverse the Northern Rapti River, Home to Crocodiles. Inside the Park is Balmiki Ashram, a Hindu Pilgrimage Site. kathmandu kathmandu Has Been the Center of Nepal's History, Art, Culture and Economy. It Has a Multiethnic Population Within a Hindu and Buddhist Majority. Religious and Cultural Festivities Form a Major Part of the Lives of People Residing in Kathmandu. Tourism is An Important Part of the Economy as the City is the Gateway to the Nepalese Himalayas. There are also Seven Casinos in the City. in 2013, Kathmandu Was Ranked Third among the Top Ten Upcoming Travel Destinations in the World By Tripadvisor, and Ranked First in Asia. Historic Areas of Kathmandu Were Devastated By a 7.8 Magnitude Earthquake On 25 April 2015. Nepali is the Most Spoken Language in the City, While English is Understood By the City's Educated Residents.Airfare / Rail Fare govt Tax of 5% Over and Above the Tour Cost Mentioned entrance Fees Which Not Mentioned in Itinerary any Increase in Airfare, Airport Taxes, Any Up Gradation in Airline Class or Hotel Room Category cost of Insurance cost of Pre/post Tour Hotel Accommodation any Extra Cost Incurred On Behalf of An Individual Due to Illness, Accident, Hospitalization, or any Personal Emergency