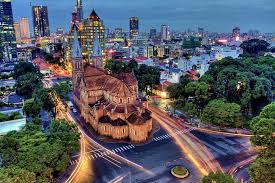 Journey to the West of Vietnam Tour


About Rutveg Travel and Tourism