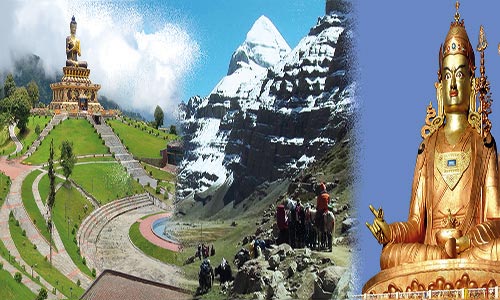 Himalayas on Wheels to Sikkim: Small but beautiful, Sikkim is situated in the eastern Himalayas. The state is spread below the Mount Khanchendzonga (8534 m), the third highest mountain in the world, and revered by the Sikkimese as their protective deity. With an area of 7,300 sq km and measuring approx. 114 km from the north to south and 64 km from east to west, the elevation ranges from 300 meters to over 8540 m above sea level. Amidst the grandeur of the mountain peaks, lush valleys, fast flowing rivers, hills, Sikkim offers her visitors a rare and singular experience. Within a matter of hours one can move from the sub-tropical heat of the lower valleys to the cold of the rugged mountain slopes that reach up to the area of perpetual snow.