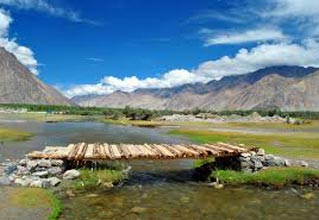 Flight Tickets Delhi - Leh - Delhi Assistance upon arrival at Leh airport with traditional welcome in the Hotel 06 Nights / 07 Days Accommodation on twin sharing Basis as per the Itinerary Meals (Breakfast + Dinner) MAP Basis Return airport and round trip transfers along with all sightseeing tours by Innova as per the program. Inner line Permit to restricted / protected areas (Pangong Lake / Nubra Valley)Monument & Museum Entrance Fees for the sights mentioned in the Itinerary Any Kind of Personal Expenses or Optional Tours / Extra Meals Ordered. Any thing not specifically mentioned under the head "Prices included". Tips, Insurance, Laundry, Phone Calls. The Services of Vehicle is not included on leisure days & after finishing the sightseeing tour as per the Itinerary Any Kind of Drinks (Alcoholic, Mineral, Aerated) Guide fee, camera fee, Soft or Hard drinks, Starters. Medical & Travel insurance. Additional costs due to flight cancellation, road blocks etc.01-0531-07

Travel Has Always Been An Exciting Activity for People Across the Globe. Be It for the Purpose of Business or for Leisure, Traveling Has Its Own Fun and the Joy One Can Drive from Traveling Cannot Be Compared to Any other Thing. Proper Organization and Budget-friendly Arrangements are Key Imperatives to Enjoy the Destination of Your Choice. and We, as a Reliable Travel Agency, Providing a Variety of Travel Solutions to the Clients, Under One Roof. When You Travel with Us, from the Time of Trip Booking to the Time You Come Back to Your Motherland, We Take Care of Everything. Read More...