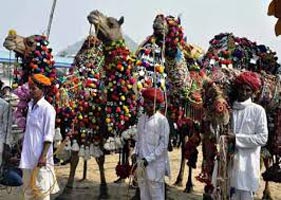 The pulsating beats of vivid images of Pushkar brings alive the rich tradition of Rajasthan enhancing the glory of the golden sand in the Spectacular Fair Ground in the month of "Kartika" (November) with bedecked Camels, decorated cattle, adventures competitions, yogis, yoga & meditation, breathtaking events, jostling rustic crowd, meditating sadhus, holy lake dip, vivid stalls, exotic fair, colorful desert, so typical, so obvious, It can be nothing else but the “Pushkar Fair”

An amalgamation of a marvelous juxtaposition of commerce and devotion, Pushkar Fair, is a lifetime experience in conjunction with having religious entity and is famous for its Cattle Fair, Camels, Horses, Donkeys, Bulls, etc. are bought, powdered, beautified, raced, paraded and sold on the sand.Early Bird Discount 10%Airfare, Breakfast on day of Arrival, Meals (where not mentioned) medical & personal expenses like beverages, tips and gratitude’s, telecommunication charges, Wi-Fi charges, laundry, Insurance of any kind, Visa fees, and what so ever not mentioned under “cost Includes”10-1123-11


We accept credit cards via PayPal and direct bank transfers. All remittances by foreign nationals should be via credit card OR via direct Bank wire -transfer from sender’s bank to recipient’s bank account in New Delhi with copy of confirmation sent to us.

On confirmation of the programme from the " Company " a deposit equal to 50% (fifty) of the contracted value of the tour price is required to be sent directly to the "Company's" bankers, vide swift transfer/ credit card with a confirmation copy of the same to the "Company's " headquarters, at New Delhi. The balance of the contracted value 50% (Fifty) shall be paid not less than 35 days before commencement of tour OR a deposit of 100% (Hundred) is required 35 days before commencement of tour.

All disputes subject to Delhi Courts only.