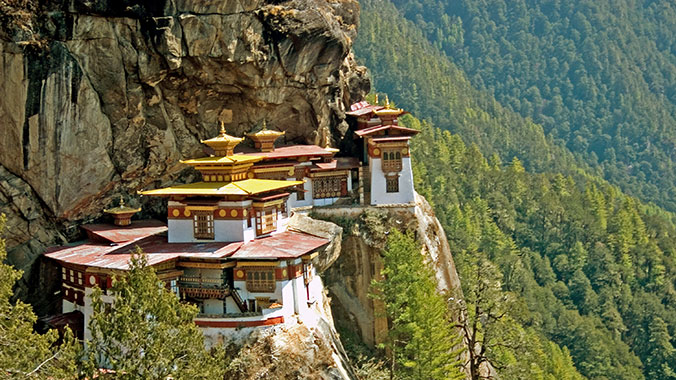 The Journey to the Mountain Kingdoms- Bhutan and Sikkim 17 Days

Feel the power of being under Kanchenjunga, the beautifully shaped range that dominates Sikkim. Unique fauna and flora, wild nature and some of the most welcoming people of India awaits you. Complete this itinerary with a visit to the main attractions of Bengal, the British heritage of Kolkata and the tea culture in Darjeeling will take you through a shortcut to the Raj times and Bhutan, the isolated country, the untouched destination of the Himalayas. In Bhutan tourism is handled with care to preserve the unique natural beauty and the unspoilt heritage of its people. Travel to the beautiful Tshanghu Lake. Visit Rumtek Monastery an esteemed Buddhist religious place. Visit Tiger Hill to view sunrise over Kanchendzonga Peak. Visit Rimbi Falls, Kanchenjunga Falls and Khecheopalri in Pelling. Visit the holy clift of the Tiger outside Paro Learn about the Bhutanese peculiar history of isolation Drive from valley to valley in the panoramic roads of the Himalayas

X Hi, Planning To Travel? Let us help you.
Live Chat
TourTravelWorld
TourTravelWorld
Hello! Are you looking for The Journey to the Mountain Kingdoms- Bhutan and Sikkim 17 Days ?