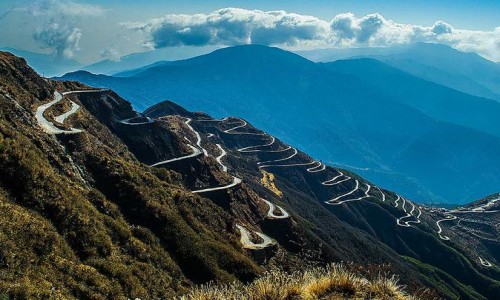 About Sikkim: Small but beautiful, Sikkim is situated in the eastern Himalayas. The state is spreader below the Mount Khanchendzonga (8534 mts), the third highest mountain in the world, and revered by the Sikkimese as their protective deity. With an area of 7,300 sqkms and measuring approx. 114 kms from the north to south and 64 kms from east to west, the elevation ranges from 300 meters to over 8540 meters above sea level. Amidst the grandeur of the mountain peaks, lush valleys, fast flowing rivers, hills, Sikkim offers her visitors a rare and singular experience. Within a matter of hours one can move from the sub-tropical heat of the lower valleys to the cold of the rugged mountain slopes that reach up to the area of perpetual snow. The modern history of Sikkim begins from 1642 A.D. with the coronation of PhuntsogNamgyal as the first Chogyal or king of Sikkim in a tranquil pine covered hill in YuksomNorbugang in West Sikkim. The Namgyals were scions of the Mi-nyak House in Kham in Eastern Tibet. It is said that there were three brothers, chiefs of Kham Mi-nyak. A letter dropped from heaven directed the middle brother to go south towards Sikkim where his descendants were fated to rule. It was in Sakya that his eldest son single-handedly raised the pillars of the Sakya monastery and earned himself the sobriquet of ‘KhyeBumsa( the strength of a lakh of men ). KhyeBumsa also earned himself the hand of the daughter of the Sakya hierarch and settled in Chumbi Valley, which remained, for a long time, the epicenter of the later kingdom of Sikkim. About Bhutan: - The Kingdom of Bhutan, a gem in the eastern Himalayas, areas 38,394 square km. and is populated with just little above 750,000. Looking from a natural side, fauna and flora flourishes in great varieties as the terrain rises from southern foothills (150m above sea level) to unclimbed peaks over 7000m. The kingdom is one of the leading countries in environmental conservation. Over 70% of Bhutan’s land area is still under forest cover. One of the most striking physical features of Bhutan is its architecture. Patterns of rich colours adorn walls, beams, pillars and doors in traditional splendour. Tiger’s Nest may like to experience 8th century and follow the trails of Guru Padmasambhava’s legendary travel through Bhutan. Legend says that he flew to the cliff s of Taktsang on the back of a tigress. Taktsang temples (Tiger’s Nest), built on the cliff s above the valley of Paro, is one of the highest holy Buddhist spots in the world and listed in 1000 best places to see before you die.