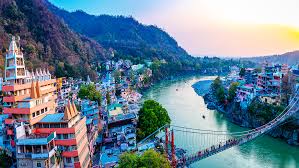 Rishikesh is the most beautiful blend of spiritual and adrenaline pumping experiences. Rishikesh on the foothills of Himalayas is the hub of many ancient temples, popular cafes, yoga ashrams and adventure sports. The ancient town of Uttarkashi is much like Kashi of the plains and the district headquarters of Uttarkashi district. Uttarkashi is mostly famous for the four religious centers, or as they say, the Char Dham & Teen Dham Spots. Guptakashi enjoys the mesmerising backdrop of the enchanting snow-covered peaks of Chaukhamba mountains. two ancient temples namely Vishwanath Temple dedicated to Lord Shiva and Ardhnareshwar Temple. Kedarnath is popular for its ancient Shiva Temple, shrines, Himalayan ranges and undulating landscapes. The Badrinath temple dedicated to the preserver, Lord Vishnu. Joshimath, also known as Jyotirmath is a city and a municipal board in Chamoli District in the Indian state of Uttarakhand. The famed town of Rudraprayag is named after the Rudra avatar of Lord Shiva. This heavenly town is encircled by the emerald lakes, glaciers, foaming rivers and silver streams. Haridwar you’ll be welcomed with the chimes of the temple bells and the religious chanting of the priests.
This Package cost based on 02 persons travelling together if no of persons increase or decrease cost will be change & Cost valid till up to Month of September.